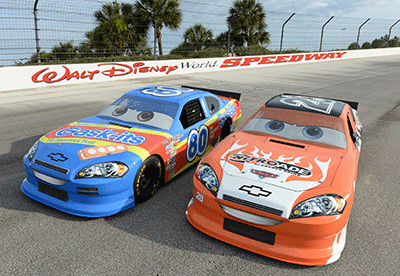 Two characters from “Cars” have come to life for the Richard Petty Driving Experience at Walt Disney World Speedway. The No. 28 Aiken Axler and No. 80 Sage VanDerSpin are part of the new Piston Cup Junior Ride-Along program, which gives children ages 6 to 13 (and at least 48 inches tall) an exciting opportunity to ride shotgun with a professional driving instructor for three thrilling laps.

The two full-size custom cars were created by “Cars” creative director Jay Ward and showcase the characters’ team colors and sponsors. No. 80 VanDerSpin, the youngest winner of the Junior Piston Cup Pro Series, races for Team “Gask-Its.” No. 28 Axler races for Nitroade and was named the Vitoline Rookie of the Year in his first season of Cup competition.

The cars were designed to protect children’s smaller bodies, and the racing seats include built-in shoulder and head protection and a safety harness similar to the ones worn by NASCAR drivers.